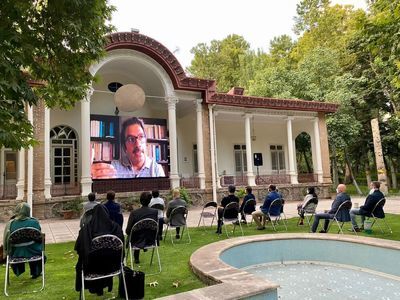 TEHRAN –(Iranart)-The eight episode of the video series "Domus Eyes on Iran", produced by the Italian Embassy in Tehran in cooperation with the Milan-based renowned international magazine Domus, was released yesterday.

“Pouya Khazaeli Parsa. Persian Modernism and the Social Function of Architecture" is the title of the new episode, screened yesterday at an event hosted by the Italian Ambassador Giuseppe Perrone at his residence in Farmaniyeh, as part of the celebrations of Italian Design Day 2021 in Tehran.

The documentary features Pouya Khazaeli Parsa, the Iranian architect with the highest number of works published by Domus magazine. Among his works that have attracted Domus’ attention in recent years are Khazaeli Parsa’s residential villas in Mazandaran, on the Caspian Sea, and in Darvishabad.

A key feature of these works is the successful combination of the influence of European rationalist and modernist architecture with architectural elements typical of Persian tradition, such as the use of a central courtyard around which the construction revolves.

Another distinctive element in Mr. Khazaeli Parsa's work, as explains the architect himself, is the social function assigned to architecture in improving the quality of life of ordinary people, especially the most disadvantaged ones.

In the episode screened by the Italian Embassy special attention has been devoted also to two special projects, covered as well by Domus magazine, which visibly illustrate the social function of architecture as conceived by Khazaeli Parsa.

The first one is a bamboo structure built in the forests of Katalom, in northern Iran. The second one relates to the buildings designed for Afghan refugees in the Kerman region, and to the "Rebuild" project developed for the benefit of Syrian displaced people in Jordan. The latter was made possible thanks to the funding provided by Pilosio, one of the leading Italian companies in the field of construction equipment.

The series “Domus Eyes on Iran” takes inspiration from stories published by Domus magazine about Iran from the 1940s until present, focusing on each work’s features and exploring their subsequent evolution, as a showcase of an unhindered history of long-lasting cooperation and exchange between Italy and Iran.

The video-documentary “Pouya Khazaeli Parsa. Persian Modernism and the Social Function of Architecture” and the previous episodes of the series (“Isfahan Persian Gardens and New Urban Trends”, “The Tehran’s Contemporary Museum. The Anti-Monument”, “Qajar Tehran. The Glass & Ceramics Museum and the Italian Residence”, “Orsi Khaneh. A Window on Iran’s Unique Blend of History & Modernity”, “Architecture Meets Nature by Sara Kalantary & Reza Sayadian”, “Gaetano Pesce and the Tehran National Library”, “Villa for an Older Brother”) are available for viewing on the social media platforms of the Italian Embassy in Tehran (YouTube, Instagram, Twitter).