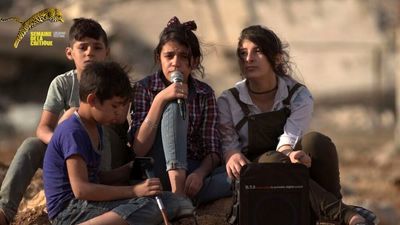 TEHRAN.(Iranart) – Iranian director Reza Farahmand’s documentary Copper Notes of a Dream will be screened in the 30th edition of the Semaine de la critique (Critic’s Week), an independent section organized by the Swiss Association of Film Journalists in cooperation the Locarno Film Festival.

The film is about a ten-year-old Palestinian refugee, Malook, who lives in Jarmuk, a suburb of Damascus in Syria, which is ruined during the war with ISIS.

To earn money for the concert, Malook and some friends pull the copper lines out of the walls of empty buildings that are riddled with bullets and rockets and write apologies for their theft on the walls, in hope the people who have fled ever return.

Farahmand’s acclaimed documentary Women with Gunpowder Earrings, about a female journalist who covers stories about Syrian and Iraqi women and children in the war against the ISIS terrorists, was selected for the previous edition of the Semaine de la critique.

Six more documentaries including Shalom Allah by David Vogel from Switzerland, Murghab co-directed by Martin Saxer, Marlen Elders and Daler Kaziev from Germany and The Euphoria of Being by Réka Szabó from Hungary will go on screen in this section.

Adolescents by Sébastien Lifshitz from France, Another Reality co-directed by Noel Dernesch and Olli Waldhauer and Lovemobil by Elke Margarete Lehrenkrauss, both from Germany are also among the films.

The organizers of the Semaine de la critique plan to celebrate its 30th anniversary by a review of Swiss director Fredi M. Murer’s Der Grüne Berg, which was screened during the first edition in 1990.

The Semaine de la critique will take place in the Swiss city of Locarno from August 9 to 16, focusing on innovative films on the periphery of the mainstream – both formally and content wise.