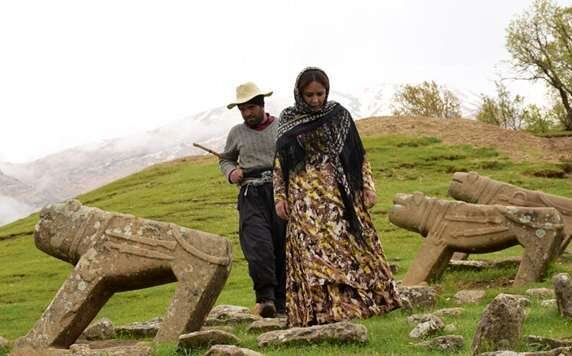 Iranart: The winners of the festival, which was held online this time due to the pandemic, were announced on Thursday, and the film received the award in the New Asian Currents category.

The film is about Mina, a makeup artist who is determined to realize her dreams. She not only refuses to succumb to her husband and mother-in-law’s fierce opposition, but also paves her own path and pushes forward along it. Gradually, it looks as if the people and world around her are starting to change.

Another Award of Excellence in this category was given to “Three Songs for Benazir” from Afghanistan.

Directed by Gulistan Mirzaei and Elizabeth Mirzaei, the short documentary depicts a young man in a camp for displaced persons in Kabul singing for his beloved wife Benazir as if the whole world was theirs alone. We see him next four years later, facing the consequences of the path he was forced to choose in providing for his family, after his struggle to find work.

“Little Palestine, Diary of a Siege”, a co-production by Lebanon, France and Qatar received the Ogawa Shinsuke Prize, the grand prize of this section.

It is about life in a Palestinian refugee camp in Syria. The situation in the country worsens, with roads blocked and food so scarce that people start dying not only from bombardment but starvation as well. With no end in sight, all they can do is put one foot in front of the next.

The Robert and Frances Flaherty Prize, the grand prize in the international competition, went to “Inside the Red Brick Wall” from Hong Kong.

This film shows Hong Kong shaken by the “one country, two systems” policy. In November 2019, protestors calling for democratic reform are besieged in a university by heavily armed officers. In scrupulous detail, these anonymous filmmakers capture the worn out and anxious youth who are being beaten into submission by the violent and cunning forces of power.

On the outskirts of Valencia, in a region rich in irrigation agriculture, lives a farming family that has been growing tiger nuts for generations. Camagroga follows their lives for one year as they continue to work on the farm. Despite the upheavals in modern development that encroach upon the area, we see their faces beaming with pride and joy in their trade, and learn about the history of the land itself.

The Awards of Excellence in the section were given to “City Hall” directed by Frederick Wiseman for the U.S. and “Night Shot” by Carolina Moscoso Briceno from Chile.

“The First 54 Years—An Abbreviated Manual for Military Occupation”, a co-production from France, Finland, Israel and Germany by Avi Mograbi, was honored with the special jury award.