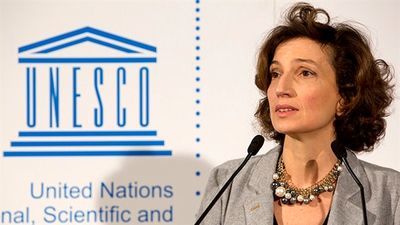 TEHRAN.(Iranart) – UNESCO Director-General Audrey Azoulay, in her message on the 1,750th anniversary of the University of Gundi-Shapur, said: “UNESCO stands ready to support the Islamic Republic of Iran in its efforts to promote science and technology, create knowledge, and share it.

In this way, we will support not only scientific progress, but also the progress of all mankind, she added.

“Since its creation, this university, the intellectual capital of the Sassanid Empire, has been a major center for producing knowledge, a truly universal forum for science. It is this idea that we celebrate today,” she added, IRNA reported.

The history of science in Gundi-Shapur, which its origin dates far back in time, and its impact on the world are among the topics which are to be discussed in the two-day congress, according to organizers.

“This fundamental principle echoes the motto inscribed at the entrance of the University of Gundi-Shapur in Iran, 1,750 years ago: Science and knowledge, virtue and wisdom are more important than force and sword,” Azoulay said.

“Indeed, the university has played a crucial role in Iran’s historical excellence in science. In ancient times, Persia was a center for scientific achievement and a conduit of knowledge – from China and India in the East, to Greece and Rome in the West.”

Moreover, the director-general of the UN body reminded that the Islamic Republic is a key partner of UNESCO in knowledge and science.

“Today, in keeping with this heritage, Iran is one of UNESCO’s key partners in knowledge and science. The country hosts eight Category II centers and 11 UNESCO chairs in the science field. It is also home to 13 biosphere reserves – one of the highest numbers among member states.”

This great tradition of promoting peace and prosperity through science, knowledge, and culture is central to UNESCO’s role. It is also more precious than ever, as the international community faces new challenges: Climate change, biodiversity collapse, technological disruptions, widening inequalities, she added.

Azoulay noted that all such challenges call for the contributions of researchers, academics, inventors – the universal republic of knowledge “that we are celebrating today”.

“These challenges have been amplified by the COVID-19 pandemic. Humanity must make choices, and in doing so, overcome its differences by defining which values we want to guide us, and what kind of world we want to live in.”

“At UNESCO, we have long believed in the potential of science, provided that it evolves within an ethical and humanistic framework. As we face a new period of uncertainty, it is more necessary than ever to recall this idea of cooperation and solidarity,” the UNESCO chief added The director-general voiced UNESCO’s reediness to expand support for the promotion of science and technology, saying, “UNESCO stands ready to support the Islamic Republic of Iran in its efforts to promote science and technology, create knowledge, and share it. In this way, we will not only support scientific progress but also the progress of all mankind.”

Gundi-Shapur, also spelled as Jundi-Shapur, which is located in modern Dezful, southern Iran, was one of the world’s birthplaces of knowledge and wisdom, which is a source of national pride and enthusiasm for Iranians.

The city was the intellectual center of the Sassanid Empire (224–651) and the home of the Academy of Jundi-Shapur University, which offered education and training in medicine, philosophy, theology, and science.

The university was home to a teaching hospital, and also comprised a library and a center of higher learning. It has been identified with extensive ruins south of Shahabad, a village 14km southeast of Dezful, to the road for Shush, in the present-day province of Khuzestan.

The town fell into decline after the Muslim conquest of Persia (633–654), the city surrendering in 638, however, it continued to remain an important center in the Muslim period. Yaqub Layth Saffari, the founder of the Saffarid dynasty, made Jundi-Shapur his residence three years before his sudden death. His tomb became one of the most prominent sites in the city.