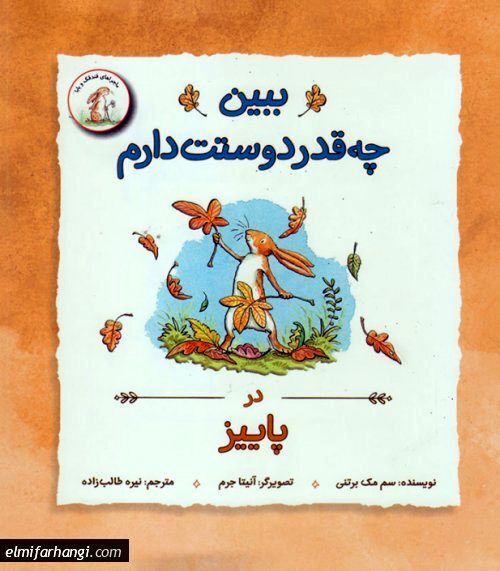 TEHRAN –(Iranart)- “Guess How Much I Love You”, a British children’s book written by Sam McBratney, has been released by the Elmi Farhangi Publishing Company.

Nayyereh Talebzadeh is the translator of the book, which carries the original illustrations by Anita Jeram.

The book was first published in 1994, in the United Kingdom by Walker Books and then in 1995, in the United States by its subsidiary Candlewick Press.

Little Nutbrown Hare asks Big Nutbrown Hare the title question, “Guess how much I love you?”, and the book continues as the two use larger and larger measures to quantify how much they love each other in answer to the question.

The book was a 1996 ALA Notable Children’s Book. According to its publishers, in addition to the ALA award and numerous other awards, it has sold more than 43 million copies worldwide and been published in 57 languages.

Based on a 2007 online poll, the National Education Association in the U.S. listed the book as one of its “Teachers’ Top 100 Books for Children.”

“Guess How Much I Love You” has been published in several different formats, suitable for children from age 1½ to 8. It has been adapted as a television cartoon show in the U.S.

In 2010, an animated adaptation of the story began airing through Canada’s TVO Kids and United States’ Disney Junior.

The show is produced by SLR Productions Australia (Suzanne Ryan) and Scrawl Studios and distributed by CCI Entertainment.

Reception for the show has been positive, and in 2013, it received an AACTA Award nomination for Best Children’s Television Series. It was renewed for a second season.

Guess How Much I Love You Sam McBratney