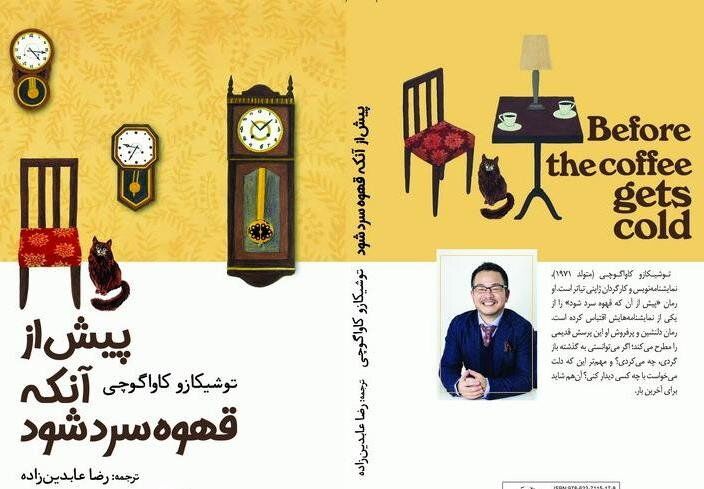 TEHRAN –(Iranart)- A new Persian translation of Japanese writer Toshikazu Kawaguchi’s novel “Before the Coffee Gets Cold” has come to Iranian bookstores.

Aradman is the publisher of the new translation by Reza Abedinzadeh, which hit the Iranian bookstores nearly one month after the release of the first Persian rendition of the book by the Moon publishing house.

The original edition was published in 2015 and an English translation of the book by Geoffrey Trousselot was released in 2019.

In a small back alley in Tokyo, there is a café that has been carefully serving brewed coffee for more than one hundred years. But this coffee shop offers its customers a unique experience: the chance to travel back in time.

In “Before the Coffee Gets Cold”, we meet four visitors, each of whom is hoping to make use of the café’s time-traveling offer, in order to: confront the man who left them, receive a letter from their husband whose memory has been taken by an early onset of Alzheimer’s, to see their sister one last time, and to meet the daughter they never had a chance to know.

But the journey into the past does not come without risks: customers must sit in a particular seat, they cannot leave the café, and finally, they must return to the present before the coffee gets cold.

Kawaguchi’s beautiful, moving story explores the age-old question: what would you change if you could travel back in time? More importantly, who would you want to meet, maybe for one last time?

Kawaguchi was born in Osaka in 1971. He formerly produced, directed and wrote for the theatrical group Sonic Snail. As a playwright, his works include “COUPLE”, “Sunset Song” and “Family Time”.

The novel “Before the Coffee Gets Cold” is adapted from an 1110 Productions play by Kawaguchi, which won the grand prize at the 10th Suginami Drama Festival.

Before the Coffee Gets Cold