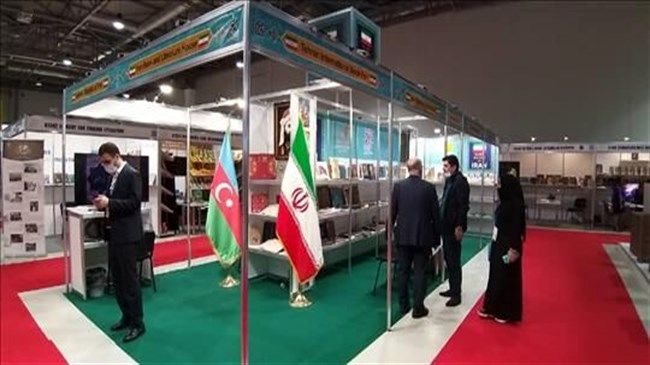 The books are presented in Persian, Azerbaijani, Turkish, English, and Russian languages.The exhibition will wrap up on October 10.

Azerbaijani officials including Minister of Culture Anar Karimov and Deputy Prime Minister Ali Ahmadov visited Iran’s pavilion and were impressed by the number of works related to Persian poet Nizami Ganjavi whose 880th birthday anniversary is the focus of this edition of the event.

Publishers from different countries including Iran, Turkey, Indonesia, Colombia, Russia, and the host country are present in the book fair.

“The presence of friends and neighbors in this exhibition is a source of happiness for us. Iran and Azerbaijan have many commonalities and we must seize these great opportunities to get closer to each other,” Karimov said.

This year, 43 foreign organizations from 12 countries, 121 local publishing, and printing companies are taking part in the exhibition, and more than 200 events in various formats are underway within the framework of the fair.

The exhibition presents puppet shows based on the works of Ganjavi, ‘Children's World,’ meetings with children's writers, master classes for children and adults, presentations of books on topical issues.

Ganjavi, who was born in Ganja, Republic of Azerbaijan, made an invaluable contribution to the history of not only Persian poetry, but also world literature.

He is mostly known for ‘Khamseh,’ two copies of which are kept in Iran, and was inscribed on UNESCO’s Memory of the World Register list in 2011.