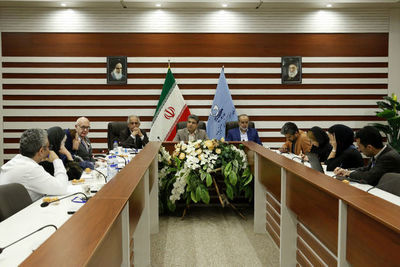 TEHRAN. (Iranart) – A group of Iranian academics and regional officials had a meeting with representatives of the Brera Academy (Accademia di Belle Arti di Brera) and Chiefe Company form Italy and others at the Chabahar Free Trade–Industrial Zone. During the Saturday meeting on the sidelines of the 8th Fajr Fashion and Clothing Festival the participants discussed latest trends in the fashion industry in Iran and abroad.

Speaking at the meeting, Pouya Fayznia, representing the Contemporary Heritage Institute, said the Iranian fashion industry needs to build bridges with other industries across the globe: We need to open up the Iranian society. This can more than double the role of international events like the Chabahar Fashion and Clothing Festival.

He added: The training workshops at the festival surprised many international visitors, like those form Italy. They never expected to see a rich culture and heritage in the Iranian fashion and clothing industry. They were particularly touched by the international standards of the festival and the exhibition.

Also speaking, Mehdi Afzali, the managing director of Institute for Development of Contemporary Art said: International academics are the part and parcel of this annual event. They will help us introduce Iran as a hub to study the fashion industry. We are confident that they will encourage other academics to get on board for future workshop events.

Also speaking, Sergio Venuti, a scholar from the Accademia di Belle Arti di Brera, said he learned a lot from his experience in Iran, adding: This was an interesting experience for me. This part of the festival was particularly enriched for this year. We came up with more complex courses for our training workshops. This included discussions about meanings and concepts in order to come up with or adopt an international language for the Iranian fashion industry. That’s the only way to get into the world markets.

Chiefe Company representative María Del Rosario Barboza said: Chiefe has 220 personnel, of which 50 work on designs, and 25 popular brands in Europe and the United States works in this company.

In conclusion, Abdolrahim Kordi, the managing director of Chabahar Free Trade–Industrial Zone, said Chabahar is a trade hub for the entire region: We have lucrative markets for our textiles and clothes in places like Pakistan and Afghanistan. These are our target markets and through Chabahar we can easily have access to them.

He further said as part of its social responsibilities and in a bid to empower women of the region and create new job opportunities, the officials decided to host the clothing festival in Chabahar: The zone achieved its importance mainly from its geographical location.

Chabahar is an Iranian free trade zone formed according to the law on the establishment and administration of free trade–industrial zones. It was established in 1992 along with the two other free trade zones Qeshm and Kish Island to use global expertise as a tool for the development of the country, accelerating the accomplishment of infrastructure, creation of employment, and representation in global markets.