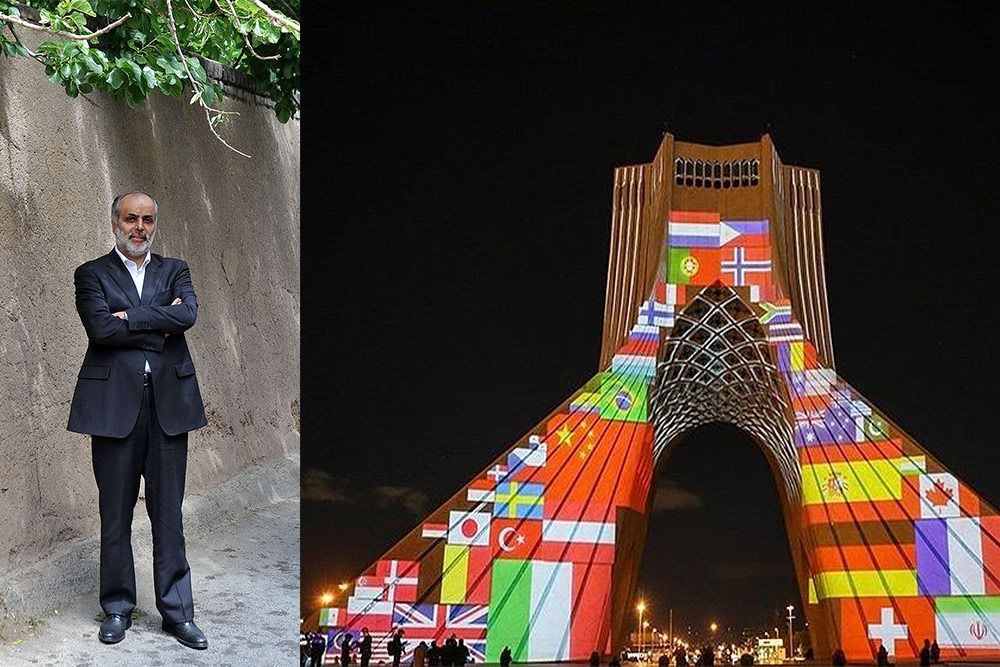 TEHRAN.(Iranart) – Azadi Tower, one of the subdivisions of the Rudaki's Arts and Culture Foundation, in days that Iran is struggling with coronavirus outbreak alongside with other countries in the world, is working as a cultural ambassador in the domestic and foreign arenas.

On February 18, 2020, Tehran's Azadi Tower was lit up as part of a ceremony showing support for people affected by the epidemic in China, especially those in the central Chinese city of Wuhan, the epicenter of the outbreak.

The ceremony attended by the Chinese Ambassador to Tehran Chang Hua and senior officials from Tehran. “Help Wuhan” and “Be Strong China,” were shown in Chinese, Persian and English on the wings of the tower, attracted many to participate in the ceremony and extend their good wishes to China and Wuhan.

Later, Chinese Ambassador to Iran in a Twitter message appreciated Tehran initiative. “China appreciates the valuable sympathy and solidarity of Iranian peoples. Their support for China is a clear indication of the thousands of years of friendship between two countries and it shows that an epidemic virus can never weaken this deep friendship,” he wrote.

On 29 March, Azadi Tower was lit up once again; this time covered with white lights in honor of the medical staff, and the phrase “Stay at Home” was engraved on it. Azadi Tower' public relations, stated the objectives of the action as “Thanks to the medical staff of the country, who are the defenders of health in front of coronavirus and attention to a national movement to stay at home.”

Recently, on the occasion of the anniversary of the establishment of the Islamic Republic of Iran, a video-mapping performance was staged at Azadi Tower. The event also sought to show the unity of Iranians with world countries in fight against coronavirus.

Rudaki's Arts and Culture Foundation director Mahdi Afzali announced the diverse artistic programs and several organizations under the auspices of foundation to accompany people on the movement of “Stay at Home”.

Afzali praised the hospital's medical staff for dealing with coronavirus and said: “It seems like the only definitive healing version of corona is that people are encouraged to stay at home to break the chain of transmission. In this way artists can make the most impact by creating a variety of programs”.

“Since the beginning of this movement, a group of the Tehran Symphony Orchestra and Iran's National Orchestra musicians, have performed pieces for the audience which these fascinating performances are available online to all people. All performances are recorded in full compliance with the principles of hygiene,” he added.

“coronavirus is a global phenomenon and relief from this calamity is only possible if all nations and countries are treated in a balanced way, to this end, we held a video mapping program at the Azadi Tower in on the subject of solidarity and sympathy with the countries involved with coronavirus, which received considerable attention from reputable medias such as Anatoly and The Guardian,” he noted.

The CEO of the Rudaki Foundation noted that interesting artistic programs of We Stay at Home movement will continue.