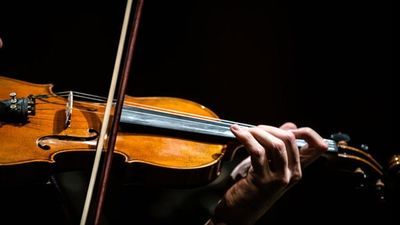 German Ensemble Musikfabrik will perform works by three Iranian musicians on January 10, 2022 in the German city of Cologne.

Iranart: Karen Keyhani’s ‘Zagros’ – for oud and ensemble – Sara Abazari’s ‘Neues Werk’ – for oud, flute, horn, percussion and violin – and Arshia Samsaminia’s ‘Micro-Moments IV’ – for flute, violin, horn, percussion, out and fixed media – as well as ‘Y’ – a musical composition for oud and live electronics by German composer Joachim Heintz – will be played for the audience, ISNA reported.

Iranian oud player Yasamine Shah-Hosseini will be the soloist throughout the show.

“The musicians of the project were selected through sessions between the ensemble’s members and Shah-Hosseini,” Keyhani said.

“It is a valuable opportunity for us as the Iranian musicians to compose for Ensemble Musikfabrik, knowing that an Iranian player and instrument will take the center stage on the night,” said Keyhani, who sees the event as a perfect occasion to introduce the Iranian contemporary music, “given the ensemble’s high technical quality of performance, and worldwide audience.”

“Following the literal meaning of its name, Ensemble Musikfabrik is particularly dedicated to artistic innovation. New, unknown, and often personally commissioned works in unusual media are typical of their productions,” writes the group’s official website.