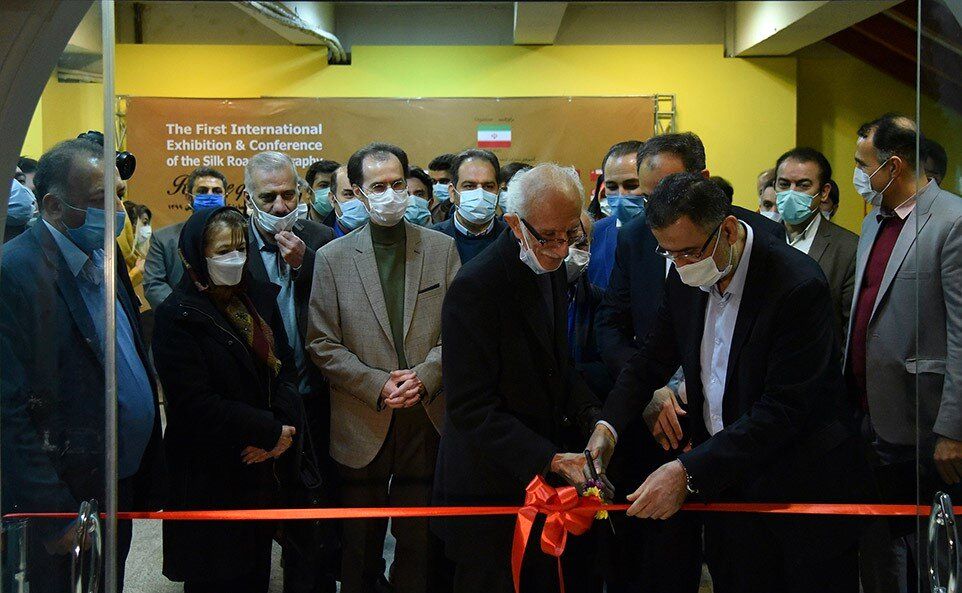 TEHRAN –(Iranart)- An exhibition of calligraphy works selected from the First Raqs-e Qalam International Exhibition of the Silk Road Calligraphy opened at the Iranian Academy of Arts in Tehran on Friday with a limited number of visitors.

Calligraphy works by 203 artists from 30 countries have been showcased at the First Raqs-e Qalam International Exhibition and Conference of the Silk Road Calligraphy in a virtual exhibition, which officially opened on January 20 in the northeastern Iranian city of Mashhad.

Speaking at the ceremony, veteran calligrapher Gholamhossein Amirkhani called calligraphy a precious heritage whose lofty status must always be preserved.

He emphasized that the Silk Road can help managers present thoughts to the world.

He said it is better to establish a union with a selection of cultural figures who are distant from politics to help convey thoughts to the world.

Calligrapher Mohammad Heidari next said that the secretariat received over 1000 submissions from 30 countries out of which 650 works will be gradually uploaded in the virtual exhibit, adding that Pakistan is attending the exhibit with the highest number of works.

“An exhibition will also be held in the Iran Mall, a large shopping mall in Tehran, which will be unveiled during the closing ceremony on January 28,” he added.

Iranian Academy of Arts acting director Alireza Esmaeili said that prominent calligraphers have helped elevate the art of calligraphy and miniature, calling the Silk Road the road of life and the manifestation of art, culture and economy.

The ceremony continued with unveiling a postage stamp to celebrate the first Raqs-e Qalam exhibition and the participants visited the calligraphy works on view.

The director of the commission, Hojjatollah Ayyubi, in a press release published ahead of the exhibit, had said, “Many luminaries believe that calligraphy is the attestation of our many other arts. The commission believes in dialogue between cultures and we are happy to be hosting such a great event.”

“Every night a selection of over 100 works from different countries is being uploaded, while we are keeping in touch live with several of the calligraphers. The works have been selected by the Iran Calligraphers Association as the coordinator of the event. Since Mashhad is the main host of the event, one night has also been dedicated to the calligraphers of Mashhad,” he added.

He further noted that a selection of 204 works also will be published and exhibited later in a museum in Mashhad.

The walls across the city of Mashhad, as well as several historical monuments in Tehran and several other cities are displaying a selection of works through video mapping, a system using light and movement as media and buildings or other surfaces as a canvas for some huge, attention-grabbing statements.

There are over 40 countries today along the historic land and maritime Silk Roads, all still bearing witness to the impact of these routes in their cultures, traditions and customs.