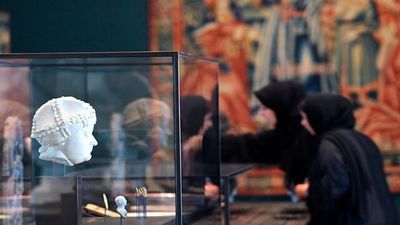 TEHRAN.(Iranart)-A videoconference entitled ‘Iran: Archeology and Iran-France cooperation’ will be held on March 18 with the cooperation and support of the Louvre Museum.

The conference is aimed at strengthening cultural and artistic relations and cooperation between Iran and France.

Those interested in attending the videoconference can send an email to contact@france-iran.org by the end of this Wednesday and receive a link to attend the meeting.

In 2018, Louvre lent art to Tehran for an ‘unprecedented’ show, which was held at the National Museum of Iran. The show was the first large-scale exhibition by a major Western museum in the country, putting on show some 50 works including a 2,400-year-old Egyptian sphinx, a bust of Roman emperor Marcus Aurelius and drawings by Rembrandt and Delacroix, and other artefacts linked to Greek, Egyptian and Mesopotamian culture, as well as objects from ancient Iran.

In parallel with the Tehran exhibition, the Louvre-Lens presented a vast collection of objects handcrafted by the talented Qajar-era (1785-1925) Iranian court, from March to July of the same year.

In addition, Iranian art masterpieces from the Qajar era were exhibited in the Louvre Museum in Paris, from March 28 to July 22, 2018.

The exhibition was organized per an agreement between the Louvre and Iran’s Cultural Heritage, Handicrafts and Tourism Organization during President Rouhani’s visit to Paris in January 2016.