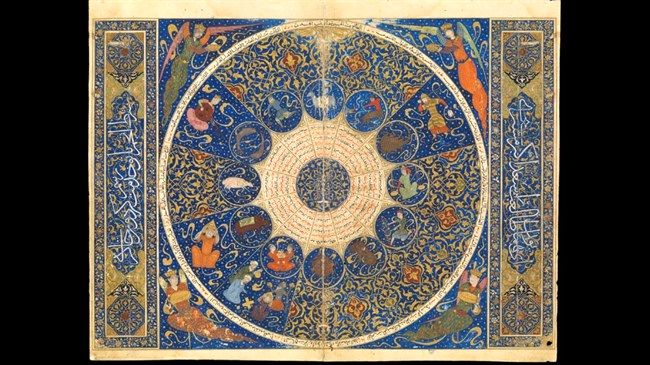 TEHRAN –(Iranart)- The UK-based exhibition on Iranian art, history, and culture, ‘Epic Iran’ is nothing if not ambitious, said Jonathan Jones in the Guardian. It aims to explore the cultural history of Iran from 3000 BCE to the present day, summarising 5,000 years of civilization into a single, coherent narrative.

To put it in context, this is a bit like “telling the story of Britain from before Stonehenge to the present and hoping it all connects up somehow”. Yet extraordinarily, it “delivers”.

Taking us from the very first civilizations established in the area covering present-day Iran all the way to the 21st century, via the triumphs of the Persian Empire, the conquest of Alexander the Great, the conversion to Islam, and the downfall of the last Shah, it is a fast-paced “luxury coach tour through the ages”.

Featuring everything from “gorgeous” manuscripts and exquisite carved metalwork to contemporary art and “quite brilliant” recreations of Iran’s “two most renowned sites”, Isfahan and Persepolis, it convincingly shows that many of the country’s present-day customs have their origins in traditions practiced by “the people who lived here five millennia ago”, theweek.co.uk reported.

One of the first things we see is a “skillfully wrought” silver antelope which is thought to date to 3000 BCE; at the time, Western Europe was still marooned in the Stone Age. We see “splendidly illustrated” manuscripts of “Persia’s greatest literary masterpiece”, the ‘Shahnameh,’ or Book of Kings; a 16th-century carpet with poetry inscribed around its borders; and the famed Cyrus Cylinder (c. 539 BCE), a “barrel-shaped piece of baked clay” inscribed with what is believed to be the world’s first declaration of human rights.

Perhaps most extraordinary of all is 15th-century potentate Iskandar Sultan’s horoscope, a “visually dazzling” map of the Zodiac specifically fiddled to give the impression that Iskandar possessed the requisite “heavenly qualities”.

It’s all rather bewildering, said Alastair Sooke in the Daily Telegraph. In the space of a few rooms, we zip from Cyrus the Great to the Parthian Empire, to the complexities of the Zoroastrian religion – with its “fire temples” and “towers of silence”.

Even the final section, featuring some “brilliant, fascinating” artists, photographers, and sculptors working in Iran today, crams their works together.

The UK-based exhibition on Iranian art, history, and culture, ‘Epic Iran’, opened on May 29, according to the official website of Victoria and Albert Museum (V&A).

Organized by the V&A with the Iran Heritage Foundation and in association with the Sarikhani Collection, the exhibition will run to September 12.