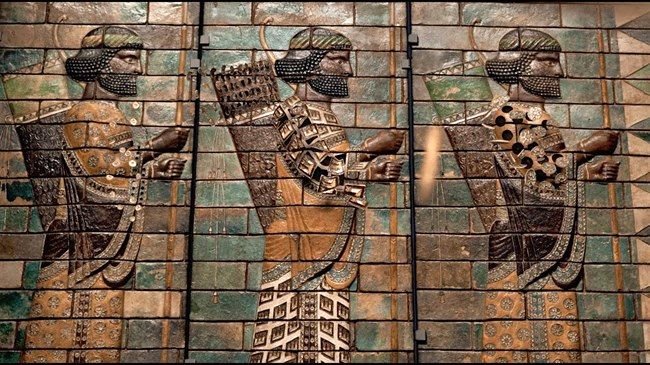 Putting 5,000 years of history on display is a challenge that Epic Iran’s organizers confronted head on. Juxtaposing a clay cylinder seal from the 2nd millennium and an abstract painting from the 21st century might leave visitors struggling to see the connection. Nevertheless, the strong thread that winds through this show is the excellence of craftsmanship, Persian honar, that appears in display after display. Iran’s tradition of craft, of masters and apprentices, of admiring past achievements in art, explains the surprising moments of recognition as one moves from one era to another in this chronologically-organized show.

This continuity is all the more remarkable when one considers Iran’s turbulent history, including the migration of the Iranians themselves into the heart of ancient civilizations like Elam and Babylon, the destructive conquest of Alexander the Great, the coming of the Arabs and the subsequent adoption of Islam, the Mongol interregnum and the chaos following the collapse of the Safavid Dynasty in the 18th century. Yet the poses of the royal guards on the limestone revetement of Persepolis echo 16th century depictions of kings’ courts. The belt of gold from the 7th century BC, intricately embossed with ibex, looks to have inspired a silk brocade woven 2,000 years later. The conservative tradition of honar never relinquished a form once perfected. Even Shirin Aliabadi’s 2008 photograph of a platinum-blond girl, blowing bubble gum and sporting a bandage from her plastic surgery, evokes the formal elegance and love of craftsmanship conveyed by ancient works.

Many of the 200 odd pieces on display here can be appreciated in their home museums, like the Cyrus Scroll and the gold horde of the Oxus from the British Museum, or the Persepolis fragments from the Louvre. There are, however, two major revelations. First, the antiquities loaned by the National Museum of Iran provide European and American visitors a much more complete picture of Iran’s connection to the ancient Middle East. Recent scientific excavations in Iran have enabled us to situate pieces that had been informally uncovered or looted from archaeological sites for much of the 20th century, providing more definitive provenance and making fakes easier to filter out. For those of us without plans to visit Tehran, this was a unique opportunity to appreciate these rare objects.

The second revelation is the Sarikhani Collection, constituting about 15% of the show. Assembled by a father-daughter team over the last 30 years, their collection is both solidly representative and boasts some must-see pieces. An album page from the Houghton Shahnameh (Book of Kings), produced for Safavid Shah Tahmasp around 1530 demonstrates the formal elegance, as well as the narrative power of Persian miniature painting. A close up view of this painting reveals a vortex that would not be out of place in 21st-century abstract paintings. Again, without an invitation to view this private collection in Henley, visitors enjoy a unique occasion to view these works.

The V&A was the natural host for this exhibit. Founded in 1852 as a museum of applied arts, almost from the beginning they have collected Iranian arts and crafts, including glazed tiles, book binding, lacquerware, and architectural elements. Some of the most intriguing pieces in the show reflect the bequests to the V&A of both 19th century Iranian artists and British collectors. In 1931, the V&A put on a blockbuster exhibit of Iranian art. That show led to Arthur Upham-Pope’s Survey of Persian Art (1939), long the bible for students and scholars. 90 years later, a new show was long overdue, as evidenced by its success with the public and tickets almost impossible to come by.

Visitors to the show are eager to understand the fascinating country that is Iran and to appreciate its arts. The show’s design addresses the latter more than the former. The captions duly situate the objects in the sweep of Iranian history. But it is not always easy to appreciate these objects as works of art. Sometimes too many objects are squeezed into a single exhibit case. One wishes the V&A had made more space available, so that, for example, one could encounter the fabulous, golden Oxus treasures in an otherwise dark room, or that the video recreation of dazzling tiled domes could be viewed without the distraction of related exhibits.