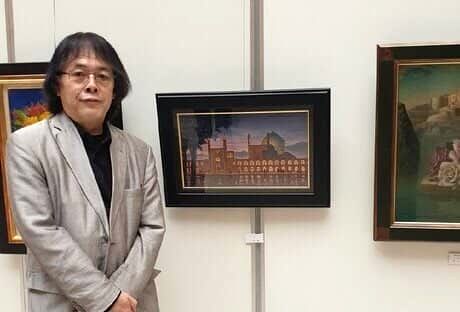 Urban spaces and Iranian historical sites are the subjects of a collection by Japanese painter Jun Matsubara who has never visited the country so far.

Iranart: A portion of his collection was showcased at the Iran-Japan Cultural Exchange Exhibition organized in Tokyo in July by Iran’s Islamic Culture and Relations Organization (ICRO) and the Iran Cultural Center in Tokyo.

“Beautiful Iran”, which depicts a view of Imam Mosque in the central Iranian city of Isfahan, was one of the works.

In an interview with the Iran Cultural Center, which was published on Monday, 62-year-old Matsubara said, “Organizing the exhibition caused me to find a new perspective on Iran, and my plan to do the painting required more serious study due to the fact that so far I have never visited Iran.”

“My studies raised my knowledge of Iran so that I became very interested in Iranian tile works, architecture and historical sites,” he added.

Referring to the architecture of the Imam Mosque, Matsubara said that there are many differences between the site and Japanese structures, and expressed his hope that he could do more paintings about Iran in the future.

He expressed his appreciation for organizing the Iran-Japan Cultural Exchange Exhibition, and asked the Iran Cultural Center to provide other opportunities for artists from both countries to showcase their works in joint exhibitions.

Murata has created “A Day to Thank Family Members” exclusively for the exhibition.

“Persepolis” by Sejima, “Travel” by Taguchi, “More than a Memory” by Tsukamoto, “Tehran” by Tsukuda, “A Fantasy of Pars with a Vase and Tulip” by Yamauchi and “Desert and Flower” by Moriyama were drawn for the exhibition.