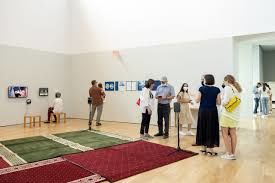 ‘Proposals for a Memorial to Partition’ brings together proposals by artists and writers for an imaginary memorial to the partitions that produced the modern nation-states of South Asia. Curated by Murtaza Vali, these proposals range from artworks and texts to sketches and maquettes, presenting a multitude of poetic and speculative approaches to a historical event that resists narrow categorisations.

Vali initiated this project in 2011 as part of a series of publications commissioned by Sharjah Biennial 10 under the title Manual for Treason. To account for the changeable nature of remembrance, the ongoing project takes an accumulative approach, with new proposals shown alongside earlier ones.

Saira Malik (S.M.): What was your motivation behind curating ‘Proposals for a Memorial to Partition’?

Murtaza Vali (M.V.): I have long been interested in how art can address both personal and collective memories of historical trauma. In the West, this strand of contemporary art practice often focuses on the atrocities of the Holocaust. The 1947 partition of South Asia seems like a key example of such profound trauma in the global south. The optimism of postcolonial independence was marred by horrific violence and mass displacement, yet, in the decades that followed, these experiences had to be repressed in the service of nation-building and development.

In my opinion, this repression has resulted in the frequent but uncanny return of the traumatic past, in the form of ongoing communal and sectarian tensions and, more recently, growing authoritarianism and the oppression of marginalized and minority communities. An open discussion of the horrors of the past is necessary to get over them and the exhibition hopes to help begin this process. The idea of soliciting proposals for a memorial to Partition was inspired by the absence, at least in 2011, of any state-initiated ones across the region.

(S.M.): What were some of the fundamental principles for you when considering the artists to be part of the show?

(M.V.): The first is, of course, the ‘proposal’ itself as an artistic device. By removing the need for actualization, for a pragmatic approach, the ‘proposal’ frees up the imagination, allowing for utopic, poetic, expansive, and unconventional thinking. I also gravitated to artists whose practices are already propositional in a way, who do not make definitive or declarative statements but produce work that is open-ended and allusive, and that must be completed by the viewer.

I also thought of specific strategies or approaches that might help lighten the difficult and heavy subject matter, making it somewhat more accessible. A couple of the proposals have a celebratory spirit, like Amitava Kumar’s gift-giving party, where what is exchanged are simple everyday objects that require components from both sides of the border to be complete, or the Forest Curriculum’s t-shirt, which transforms the razor-studded barbed wire of militarized borders into a psychedelic neon green spiral of light, like one might experience at a rave held deep in the forest once said borders have finally been abolished.

(S.M.): Can you talk us through the curatorial process behind this exhibition?

(M.V.): The first step was to come up with a wish list of artists, which I did in collaboration with my colleague Lucas Morin, Exhibition Curator at the Jameel Arts Centre. We then invited artists, sharing with them the project’s first iteration and the exhibition brief I used to solicit that batch of six proposals. We discussed themes and strategies that were part of their ongoing practices that might lend themselves well to the proposal format. But beyond that initial conversation and suggestions, the artists were free to respond to the brief in whatever way they deemed fit, and they came up with such smart, sharp ideas, enriching the exhibition in ways we could not have anticipated.

(S.M.): How emotional was the overall experience of putting a show like this together?

(M.V.): As you might expect, the subject matter is quite personal and emotional for many, if not all, of the artists in the show. The legacy of division and displacement caused by Partition extends well beyond the event itself and continues to shape lives in very real ways. Bani Abidi’s Mothers Lands (2022), maybe, best illustrates the stakes. It revisits the structure of an earlier work, Mangoes (2000), a video that dramatizes the shared histories and cultures and more recent differences between India and Pakistan through competition-tinged banter between two avatars of the artist herself over which has the best fruit. The new work does it through her subsequent experience of motherhood.

(S.M.): If the audience could take one thing from ‘Proposals for a Memorial to Partition’, what would it be?

(M.V.): Artworks themselves are multivalent, and an exhibition is a format that allows audiences to have their own individual interactions with artworks, distilling an exhibition down to one takeaway is always difficult. But if pushed, I would say I want people to realize that there is no single “correct” way to relate to and commemorate the past, especially of a traumatic event such as Partition. Everyone has a unique perspective, each of which is perfectly valid, and that together, a collection of the sort of small gestures and modest proposals presented in the exhibition might help shoulder the burden of historical trauma better than any national monument ever will be able to.