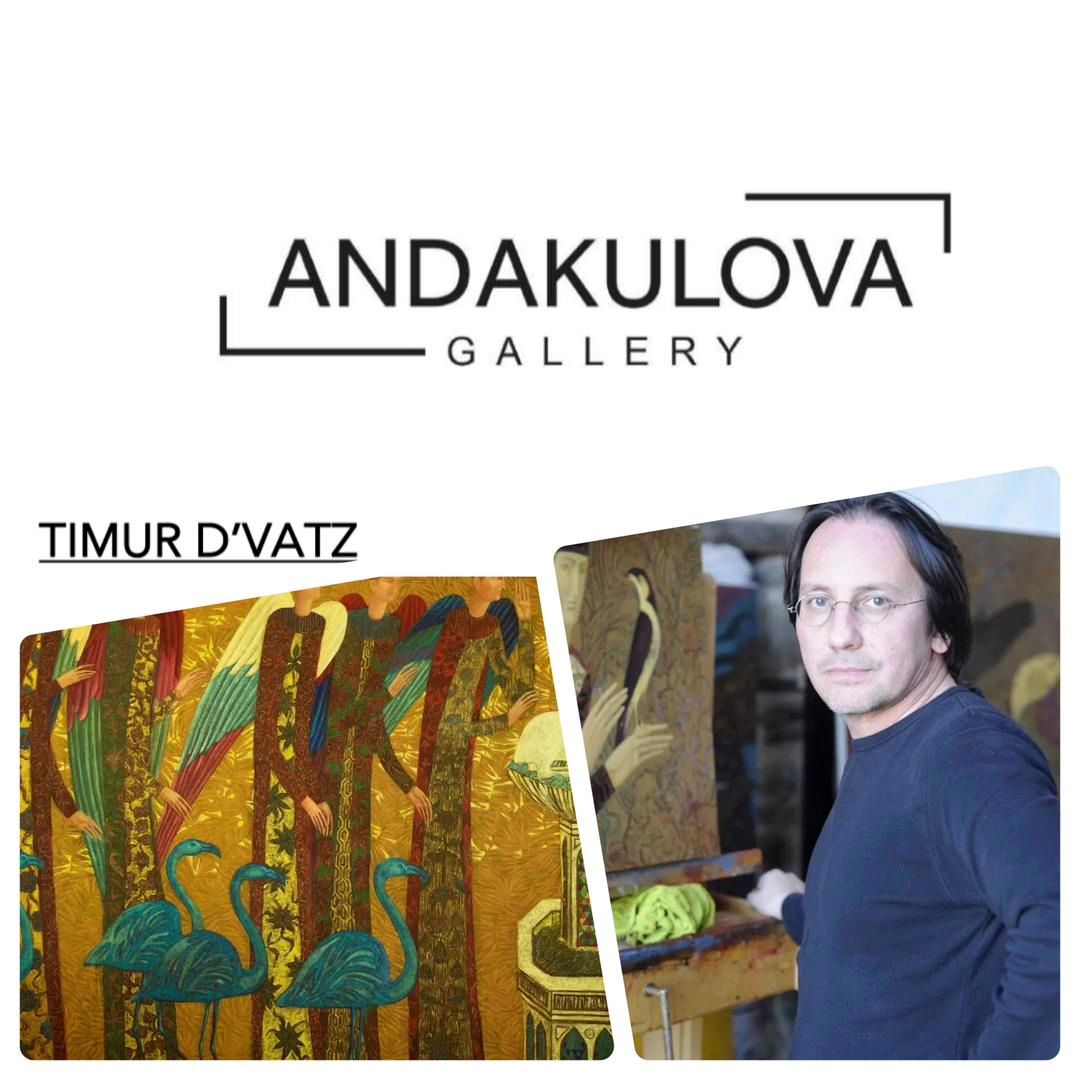 Exhibition REAWAKENING by Timur D’Vatz has opened From 8 December 2022 till 7 February 2023.

This is a series of works he painted in his new studio during an unusually warm summer in Normandy. The sunlit golds, amber reds and bright blues were revealed . The wind would stop short in tall dry grass and birds would go quiet. In the beginning all windows and doors were kept open, then the shade and soothing darkness were much needed. Behind drawn curtains, in the dimmed shimmer, new ideas came to light. Midsummer’s dreams. Reawakening.

In continue you can read his interviwe with Life Riport.

Thus ‘Reawakening’ is a return to our esoteric dreams and visions. It’s a never-ending journey into the midst of our imagination; to conquer that critical distance which exists between our inner space and outer reality. This process is not just switching off from everyday reality, it is a rather complex state of mind through which we can reach the depths of our subconscious, to the wonder world of our inner universe.

This collection of recent works is an attempt to take the spectator on the journey away and beyond to the archetypal realms of myths and legends. Through our active imagination we can revisit and restore our primordial personalities. The painting helps to achieve this mystical experience; to bring the spectator to the mysterious source of our existence.

Hidden symbolism in painting’s details helps to reawaken the longing for our Journey towards personal depths of our imagination.  Myths become uncovered and the story opens up in tapestry-like vision.  Animals represent our senses and desires. Figures, like angels, guide us in search of Knowledge and  Source of Life. The Path leads through enchanted woods and lakes, full of magic and wonder. The colours of eternal gold and red support us all the way. We are going onto the Journey of Reawakening to our Eternal Youth.

Each figure displayed in Timur’s paintings is symbolic. If the mission of Art is to transfer inner meaning, the light of the plot, comprehended through contemplation and if a painting is not just a design spot on wall, but rather a means of contact with another space, then the artist involves the viewer in the world he has created, with special energy and a certain aura.

Timur D’Vatz was born in 1986 in Moscow. In 1983, he attended Art College in Tashkent. It was a beautiful complex of old buildings with a few enclosed courtyards shaded by tall trees and refreshed by fountains.

There was the ambience of an inspiring little oasis in the middle of the big and busy city. It was wonderful to be painting in the atmospheric art studios. Lunch breaks would be just across the street, in a little café situated above the Anhor River.

Traditional food such as pilaf, lagman and nan bread, were accompanied by the music of a mountain river, as artists talked about their current art projects and dreams about the future.

Timur D’Vatz’s journey continued when he moved to Moscow in 1990, where he started to exhibit. He was a regular visitor to the Pushkin Museum of Fine Arts, where he was drawn to works of antiquity. Timur also did extensive research on the human body in the museum library.

Five years later, he moved to London, where his education continued at the Royal Academy of Arts School. He was the recipient of the Sir James Walker and Jack Goldhill Scholarships and while studying, began exhibiting in several art galleries. He actively participated in the London art world.

He was commissioned by the church for an altarpiece painting in Notre Dame de France Catholic Church in London and also won a commission to paint two paintings in the Four Seasons hotel Moscow as well.

His artworks are collected by King of Bahrain and British Royal families. Timur D’Vatz’s artworks are displayed in the magnificent Coutances Cathedral, which is a Gothic Roman Catholic cathedral constructed from 1210 to 1274 in the town of Coutances, Normandy, France.

Perhaps the most compelling aspect of Timur D’Vatz’s works is the way in which his art is inextricably linked to the world of textiles: he excels at depicting the rich fabrics of Chinese silk printing and is influenced by intricate patterns of the Nabis School.

The School consisted of a group of young French artists active in Paris from 1888 until 1900, who played a large part in the transition from impressionism and academic art to abstract art, symbolism and the other early movements of modernism.

D’Vatz’s shapes and patterns take on a life of their own, giving to the composition a lyrical harmony. The painter alleviates any possibility of visual heaviness or monotony by leaving elegant and refined forms to serve and to complicate the pictorial space.

The splashes of Baroque color and elongated body shapes create a surface pattern, which communicates the decorative and abstract qualities of his compositions.

The insistent flatness of the image, moreover, renders the elongated figures of his protagonists, the hounds and the falcons, inseparable from their environment: they seem not so much to inhabit the space, as to merge with it.