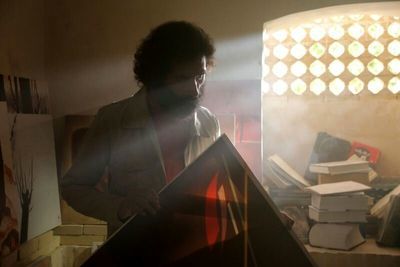 TEHRAN.(Iranart) – Iranian movies “Dream about Sohrab” and “The Dogs Didn’t Sleep Last Night” will be screening at the 51st International Film Festival of India, which will open in Goa on Saturday.

“Dream about Sohrab” by Ali Qavitan traces the mysticism and philosophy in the poetry of Sohrab Sepehri (1928-1980), second only to poet Nima Yushij, who is known for his pure style of blank verse.

As a talented artist and a gifted poet, Sepehri came to prominence with the publication of his collection “The Water’s Footfall” in 1965. His works have been translated into the English, French, Italian and Spanish languages. He died of leukemia in Tehran in 1980.

Directed by Ramin Rasuli, “The Dogs Didn’t Sleep Last Night” is a co-production between Iran and Afghanistan.

In a remote area in Afghanistan, stories of the lives of a young shepherdess, a birdcatcher boy, and a mourning teacher are intertwined after their school is burned down. The young shepherdess takes the risk of saving a female U.S. soldier after a helicopter crash. The birdcatcher boy takes shelter in a tank with the birds, the pin-ups, and the illegal music that he loves. And the mourning teacher seeks vengeance on the one who has widowed her.

Argentine filmmaker Pablo Cesar will preside over the international jury panel, which also will have filmmakers Prasanna Vithanage from Sri Lanka, Abu Bakr Shawky from Austria, Priyadarshan from India, and Rubaiyat Hossain from Bangladesh.

The festival will open with “Another Round”, a Danish comedy-drama directed by Thomas Vinterberg, and will wrap up on January 24 with “Wife of a Spy”, a Japanese historical drama romance television film by Kiyoshi Kurosawa.