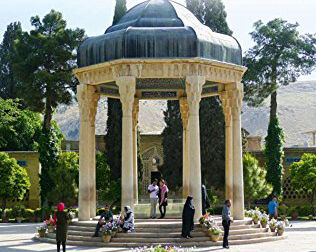 TEHRAN. (Iranart) - P eter Kerber, a former diplomat at the German Embassy in Iran, has published a book introducing Iran’s tourist attractions. The 600-page book titled ‘Iran’ provides detailed description of all the attractions with a wealth of background information on history, culture and everyday life of the people in German.

It also contains more than 50 city maps along with crucial travel tips, ISNA reported. “Iran is a fascinating land that over millennia has been a melting pot of civilizations as demonstrated by the remarkable excavations in  Persepolis or Pasargadae. In addition to the unique architectural monuments, the country has an amazing variety of landscapes with fertile valleys, barren plateaus and high mountain ranges,” the author says. Founded by Darius I in 518 BC, Persepolis was the ceremonial capital of the Achaemenid Empire (with Pasargadae being the administrative capital). It is currently situated 70 km northeast of Shiraz in Fars Province. In 333 BC, Persepolis was razed by Alexander the Great and it has been in ruins ever since. A magnificent example of the Achaemenid-style of architecture, the ruins were declared a World Heritage Site in 1979. Moreover, the book goes on to introduce some destinations not much known to foreign tourists, places like Subatan in Gilan Provionce. Ancient cemeteries, Sari Dash (Yellow stone), Alchaliq (natural park of cherry and plum trees), Hacha Dash and Ganjkhaneh cave are some of the tourist attractions in the Subatan highlands.