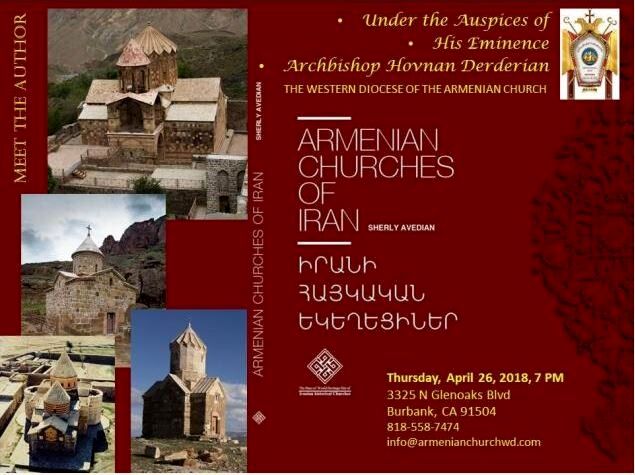 TEHRAN –(Iranart)- A book on Armenian churches in Iran has been introduced during a meeting at the Cross of Armenian Unity, a charitable cultural organization in the west-central Armenian city of Ejmiatsin.

The book “Armenian Churches of Iran” has been authored by Sherly Avedian, the Armenian coordinator of Iranian historical churches at Iran’s Cultural Heritage, Tourism and Handicrafts Ministry, Iran’s Islamic Culture and Relations Organization announced on Friday.

The bilingual book has been published in Armenian and English by the Zangak Publishing House in Yerevan.

Avedian, the Armenian ambassador to Iran, Artashes Toumanian, the Iranian cultural attaché in Armenia, Hossein Tabatabai, and the chairman of the Armenian National Committee of the International Council on Monuments and Sites, Gagik Gyurjyan, attended the meeting.

Avedian said that she has spent ten years gathering information for writing the book, and said that the book is a clear reflection of the Armenian community’s creative peaceful coexistence in Iran.

Gyurjyan thanked Avedian for writing the book and also expressed his gratitude to Iranian cultural officials for their care and concern for Armenian historical sites in Iran.

In a short speech, Tabatabai praised Avedian for writing the book, and said that Iranians and Armenians have enjoyed mutually beneficial relationships over their enduring peaceful coexistence.

Due to their attitude for living with respect for others in Iran, the Iranian Armenian community can be considered as a role model for other religious communities in the world, he added.

Toumanian also hailed Iranian Muslims for their understanding of the followers of other religions in Iran and added, “You must live among the Iranians to recognize their empathy for the others.”

The UNESCO website described the monuments as “examples of the outstanding universal value of the Armenian architectural and decorative traditions,” and adding, “They bear testimony to very important interchanges with the other regional cultures, in particular the Byzantine, Orthodox and Persian.”

The St. Thaddeus Church, also known as the Black Church (Qara Kelissa), is probably Iran’s most interesting and notable Christian monument, located near the Chalderan region in Maku, West Azerbaijan.

Christians from all over the world annually gather at the church on July 1 for their annual commemoration of the martyrdom of St. Thaddeus, one of the 12 disciples, also known as St. Jude, (not to be confused with Judas Iscariot), who was martyred while spreading the Gospel.

Located near Marand in East Azerbaijan, the St. Stephanus Church was renovated during the reign of the Safavid king Shah Abbas (1588-1629).

According to Hayk Ajimian, an Armenian scholar and historian, the church was originally built in the ninth century CE, but repeated earthquakes in the region severely damaged the original structure.

The Dzordzor Church, located in the village of Barone in Zangar Valley of the Chalderan region in the northern part of West Azerbaijan Province, was built in 1315 CE.