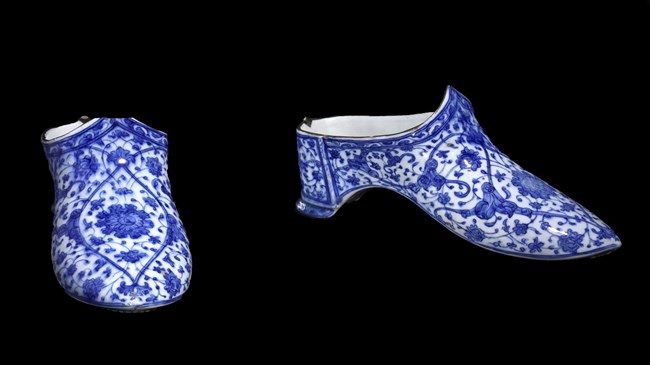 Iranart:Iran has always been the cradle of different kinds of arts, including carpet weaving, pottery, and enamels.

Many well-known museums, including the British Museum in the UK and the Louvre Museum in France, host numerous priceless Iranian objects dating back thousands of years ago.

This report presents a life-size ceramic pair of shoes, made in the southeastern Iranian city of Kerman, dating back to the seventeenth century, ifilmtv.tv wrote.

The pair, now kept at British Museum, looks like heeled shoes that were used by upper-class men in the then capital city of Isfahan and other Iranian cities.

But the question is, what is the use of a pair of life-size ceramic shoes?

Europeans that visited Iran at that time were mesmerized with the Iranian delicate art and fashion and often bought shoes and boots from Iran.

These ceramic shoes were produced for European markets. In 17th-century Holland, there was a tradition to give such shoes to new couples as a wedding present. This was a symbol of the new journey they were to begin.

So, it is possible that this pair of stone paste shoes was made for the mentioned purpose.