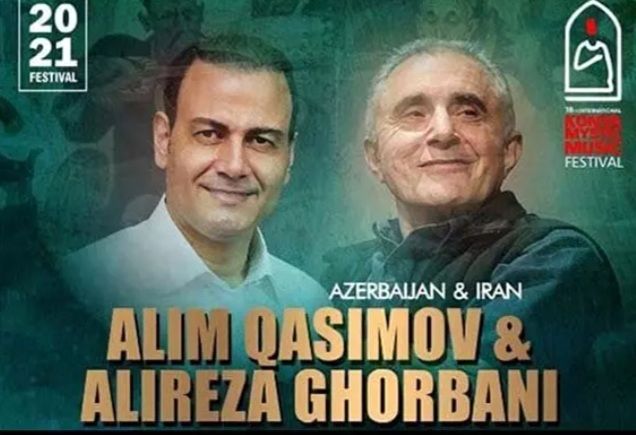 TEHRAN – (Iranart)- Vocalist Alireza Qorbani and Azerbaijan’s Alim Qasimov will be giving an concert at the 18th International İstanbul Music Festival in the Turkish city of Konya on September 30.

The concert will be performed at the Seljuk Congress Center of the Turkish town of Konya on September 30, the organizers have announced.

Musicians from England, Lebanon, Tanzania, Turkey, Jordan and Kyrgyzstan will also perform concerts at the Konya International Mystic Music Festival, which is organized annually by the Provincial Directorate of Culture and Tourism of Konya.

It always culminates on September 30, which marks the Persian mystic and poet Jalal ad-Din Rumi’s birthday.

Last year, the festival celebrated Rumi’s 813th birthday online by streaming a recording of a concert Iranian vocalist Mohammadreza Shajarian had performed at the mausoleum of Rumi a few years ago.

This will not be the first time Qorbani and Qasimov will have collaborated.

The single, composed by Iranian musician Hessam Nasseri, was recorded by the Cultural and Artistic Institute of Ahang Eshtiagh (Aerecords), a company working in the fields of audio and video productions and publications.

The two vocalists have sung both in Persian and Azerbaijani together in the song.

Qasimov has previously worked with some other Iranian musicians.

In December 2018, Iranian composer Saeid Khavarnejad and Qasimov joined together to make an album based on the Haft Paykar, the magnum opus of the Persian poet Nezami Ganjavi (c. 1141-1209 CE).

Lyrics on the album “Haft Paykar” have been sung in Persian, Azerbaijani and French.