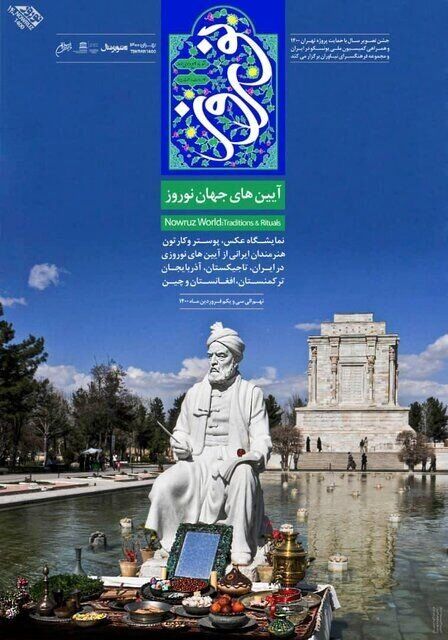 TEHRAN –(Iranart)- An exhibition displaying artworks on the traditions and rituals for the Iranian New Year celebration Noruz at Tehran’s Niavaran Cultural Center reopened on Saturday as the Iranian government has eased curbs on regular activities in the new wave of COVID-19.

Fifteen cartoons, 15 posters and 120 photos by Iranian artists are on view at the exhibition, which had shut down a few days after its opening on March 29 due to a big rise in the number of COVID-19 cases in the country.

Noruz traditions and rituals in Iran, Afghanistan, Tajikistan, Azerbaijan, Turkmenistan and China are the central themes of the exhibition, which has been organized in collaboration with the Iranian National Commission for UNESCO.

Noruz was initially registered on the UNESCO List of the Intangible Cultural Heritage of Humanity in 2009, as a common tradition for Iran, Azerbaijan, India, Kyrgyzstan, Pakistan, Turkey and Uzbekistan.

Later in a meeting held in Tehran in January 2014, Kazakhstan, Afghanistan, Turkmenistan, Tajikistan and Iraq put in requests officially to be added to the list.

The rites that accompany the festivity vary from place to place, ranging from leaping over fires and streams in Iran to tightrope walking, leaving lit candles at house doors, traditional games such as horse racing or the traditional wrestling practiced in Kyrgyzstan.

UNESCO comments that Noruz promotes the values of peace and solidarity between generations and within families, as well as reconciliation and neighborliness, thus contributing to cultural diversity and friendship among peoples and various communities.