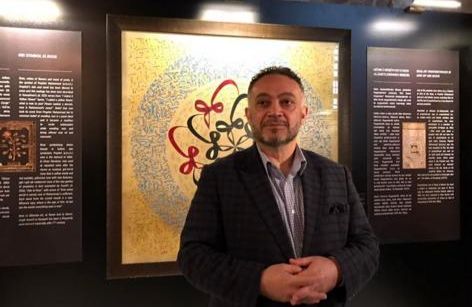 Countries such as Iran and Turkey both are way more behind from the world’s modern art. It is true that we can name artists from Iran and turkey whose artworks are sold in the world’s distinguished auctions with very high prices but it should be noted that their buyers are the citizens of their own countries.

Iranart: Kimia Nakhaei: Mohammad Chebi is the well-known Turkish collector and gallery owner who has expanded his influence on the Middle East; he attracted the attentions by creating calligraphy awards such as Haliyeh awards and awarding tens of thousands of dollars in Iran and throughout the Middle East, he has recently founded an art gallery next to the main office of Christies Auction House; by managing number of auctions in Turkey and international interactions has presented himself as a theorist in art who aims to present Turkish and Middle Eastern art in the western world.

Read some of his analysis on this topic:

In conducting this interview, Mr. Javad Khoran, a well-known calligrapher made a significant contribution, for which we are grateful.

-In the last 20 years, more attention has been paid to art in Turkey but we are still behind in comparison with the countries that are more advanced in art in terms of quality and quantity. When comparing Turkish artists with western artists both in terms of supports given to the artist and the price of artworks, we are still far behind, thus it is needed to compensate for this area.

-Countries such as Iran and Turkey both are way more behind from the world’s modern art. It is true that we can name artists from Iran and turkey whose artworks are sold in the world’s distinguished auctions with very high prices but it should be noted that their buyers are the citizens of their own countries.

-In countries such as Turkey and Iran the price difference between artworks created by contemporary artists and art pieces created by antiquated artists is negligible. For instance, an artwork by Reza Abbasi or Miremad in terms of price is almost at the same level of a contemporary artwork, meanwhile in the west there are thousands of classical artists whose artworks are sold for over a million dollars. In the west, if an artwork by Damian Hirst is worth $50 million, the artworks of the antiquates of the same school are sold between 100 to 150 million Dollars, meaning the artworks of the masters of different styles who generally are the classical artists are sold at a much higher price. Therefore, if an artwork by Amirkhani is worth about $100,000, artworks by Miremad or Reza Abbasi should be sold for about $ 1 million.

-Oil tycoons in the Middle East do not pay proper attention to the art of the region, they have a special interest in Western art and purchase artworks created by Western artists at very high prices which is wrong. What they should do is to first invest in their own national art and then, Western art.

-There are great art collectors in advanced countries. For instance, when the budget of HSBC bank is being set, in the first step they allocate funds to the artist and to support the art, this way they widely advertise their artists and their artworks. The artwork first must be introduced to the world so that later they can be sold and the westerners know this very well.

-Unfortunately, not even one Middle Eastern artist can be named who has had exhibitions in distinguished museums and art galleries in the world and whose exhibition catalogues have been translated into various languages, meanwhile such cases are happening for Western artists.

-This expectation to ask everything from government for the advancement of art is out of place because art is a personal matter.

-In Turkey, the lowest budget is allocated to the Ministry of Culture and Arts, of which 80% is spent on running costs and staff salaries and only 20% remains. What do you expect to do with that 20%? If you gather the art budget of Iran, Turkey and Egypt you won’t be able to purchase even one valuable artwork.

-Five years ago, in Turkey there was talk of a plan to exempt private sectors that support the arts from tax. But this has not happened yet due to various reasons, including economic problems.

Whenever we speak with Mr. Erdogan (Turkey’s president), he says that he is really saddened by this matter and has mentioned many times that our art is not in the place that it should be and more efforts much be made in this regard. What I do know is that implementing such law is on the government's agenda.

-If Turkey joins the European Union, its art will be moved, but this is a political decision whose timing is not known, as you can see countries such as Bulgaria and Romania are part of European Union and lag behind Turkey economically and in terms of other situations as well, while Turkey is one of the top 20 economic countries in the world, a matter which is ignored and their view of Turkey as a Muslim country effects the decision to accept this country as a member of European Union.

-In the art section, we have no shortage of artist and creativity compared to Europe and we have artists with the same value, yet when we compare the price of Claude Monet’s artwork with the Turkish artist of the same generation, Nazmi Ziya, the difference is apparent. Nazmi Ziya is not known outside of Turkey or many collectors who collect calligraphy, don’t know Sultan Ali Mashhadi.

-in 2015, the number of catalogues, brochures and books that has been published on Picasso reached 13 thousand copies and many books have been written on contemporary European and American artists, yet we don’t write books even for the most famous Middle Eastern artists.

-Corona was an opportunity along with all the bitterness and sadness, during which each artist has had the opportunity to assess themselves so that art sheds the old skin. During the history, when an innovation took place, it was due to the speed reduction of other works and aspects in life. Now an opportunity for innovation has raised.

-Currently, I am taking actions to counter all the criticisms I’ve made since the beginning of this interview… this is my view on the art of region. By the way, I’m not only engaged with the art of calligraphy, but my main work is painting.