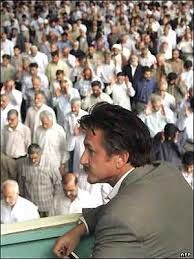 Sean Penn has said the Ukrainian people and their President Volodymyr Zelensky have “risen as historic symbols of courage and principle” as Russian troops close in on the country’s capital.

Iranart:The filmmaker and Oscar-winning actor is currently in Ukraine creating a documentary about the ongoing Russian invasion.

In a statement, Penn said: “Already a brutal mistake of lives taken and hearts broken, and if he doesn’t relent, I believe Mr. (Vladimir) Putin will have made a most horrible mistake for all of humankind.”

“President Zelensky and the Ukrainian people have risen as historic symbols of courage and principle.

“Ukraine is the tip of the spear for the democratic embrace of dreams. If we allow it to fight alone, our soul as America is lost.”

In a Facebook post on Thursday, the Office of the President of Ukraine noted that Penn has attended press briefings, met with Deputy Prime Minister Iryna Vereshchuk and spoke to journalists and military personnel about the Russian assault.

The president’s office wrote in the statement: “Sean Penn demonstrates the courage that many others, especially western politicians lack.

“The director specially came to Kiev to record all the events that are currently happening in Ukraine and to tell the world the truth about Russia’s invasion of our country.”

Penn was reportedly also in the country in late November to work on the documentary, which is being produced by Vice Studios.

The Oscar-winner has been actively involved in humanitarian projects throughout the years, including founding the non-profit organisation CORE (Community Organised Relief Effort) in response to the 2010 earthquake in Haiti.

The 2020 documentary film Citizen Penn chronicles the actions taken by Penn and aid workers from across the globe in response to the devastating 7.0 magnitude earthquake.