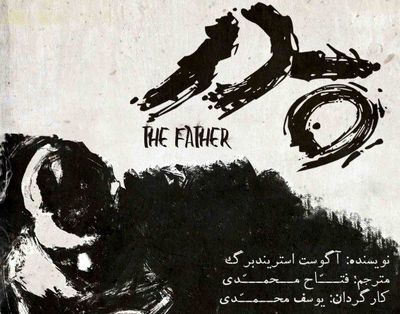 Yusef Mohammadi is the director of the play translated into Persian by Fattah Mohammadi.

“The Father” is a play written in three acts. Strindberg had come to believe that life is a series of struggles between weaker and stronger wills, and the influences of Strindberg’s misogyny and naturalistic fiction are evident in this play, one of his most important works.

“The Father” tells the story of the Captain, a scientist and freethinker whose marriage has gone sour, who is engaged in a power struggle with his wife, Laura, over their daughter.

He wants to send the girl away to school; Laura is determined to keep her daughter at home under her own influence. Laura resolves to drive her husband mad, and she begins by insinuating that he is not the girl’s father.

This play expresses a recurrent theme in some Strindberg Naturalism: Laws and culture may influence the dynamics of men and women within their various social contracts.

The play uncovers the inevitable struggle for legacy and power between the human sexes. At the time the play was written, Strindberg’s marriage with his wife Siri von Essen was deteriorating, and situations in the play could have very loosely resembled situations occurring in his failing marriage.

Different religions, Methodist, Baptist and occult spiritualism, exist in the household and vie for Bertha’s acceptance. There are also references in the play to Greek Mythology and Shakespeare’s “Merchant of Venice” and “Hamlet”.