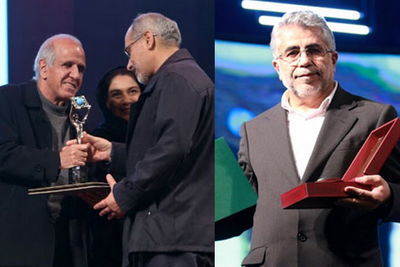 TEHRAN. (Iranart) – The winners of the 13th Iran International Documentary Film Festival, known as Cinema Vérité, were announced during a ceremony at Tehrans Vahdat Hall on Monday evening, with Rain and Bullets winning the festivals main prize The Turquoise Award.

The festivals main prize, namely the Turquoise Award for Best Documentary, went to Morteza Shabani for producing Rain and Bullets.

The Best Feature-length documentary award in the International Competition section went to a German-American co-production Ringside, directed by Andre Hörmann.

Special Mention went to Eclipse by Mohsen Ostad Ali, and the Special Jury Award went to Sheep Hero by Ton Van Zantvoort from the Netherlands.

In the short documentary section, Asho by Jafar Najafi received the first prize.

Meanwhile, Breathless Animals by Lei Lei from the US won the best mid-length documentary award in the international section.

In the Martyr Avini Award section, the Golden award went to The Old Man and the Singer by Amir Osanlou.

Meanwhile, the Audience Award went to No Place for Angels, directed by Sam Kalantari.

Cinema Vérité is Irans most prominent festival dedicated to documentaries, with an aim to express the relationship between reality and truth through documentary films.

The event is organized by Iran Documentary and Experimental Film Center (DEFC), and was presided over by Mohammad Hamidi Moghadam for its 13th edition, which was held in Tehran from December 9 to 15, 2019.